An Unreal Religion that is Actually True.

High in the mind of Jeevism are the Archetypes of the Righteous Miserati of the Light (Embodiment is Jesus) and The Mindful Sage (Embodiment is Buddha).

Human beings tend to fall on 2 sides of a psychological-behavioural continuum, and can be said to be either ‘Dopomanic’, or ‘Seratonak.’ This element of their being is produced from their inherited ‘nature,’ but also from their environmental ‘nurture.’
Dopomanics are people who seek stimulus habitually to satisfy their need for arousal. (Influenced by the impact of dopamine on the left brain). Seratonaks dislike overstimulation and seek peace of mind.

Dopomanics are pulled between 2 dissonant conflicting spheres : The Realm of the Light, and the Realm of Darkness. Their journey has turbulence, but they also travel along avenues of life lined with discrete moments of joy.

From above, the world has been ruled by The Miserati – a rare breed of Genius Dopomanics. They are corrupted breed and spend time within the Dark Realm : They seek power as an end in itself. Only the Dopomanic Jewish man called JESUS represents the only uncorrupted Dopomanic Miserati entirely of The Light. The Miserati are very rare and a normal human may go a whole lifetime without meeting one of them. They determine human ideas and thought concepts.

These Miserati do not know stable happiness but the societies they rule produce the most Money; the best Science, Literature, and Art; the greatest Empires; and also the Best Geniuses (though mentally unstable). As they have the best ARMIES their belief systems are spread through conquering lands following the use of extreme force. If a Miserati belief system produced Weak armies then they would not secure victory and their beliefs would wither away. Eventually another country would conquer them and they would take on their beliefs. However, The Miserati maintain superior military prowess and their Belief Systems spread like computer viruses, sweeping through their human farms of controlled people, determining how they think.

Societies are pyramids with a 3 tiers structure. You have the Managed Masses who form the majority – the base of the pyramid. Then there are The Managers who sit of the 2nd tier above the base. Finally on the top of the pyramid there is the 3rd tier of the select few – the Miserati of Darkness. Both The Managed Masses and The Managers on the tier above them can be either Seratonak or Dopomanic, but the Manager class is dominated by Dopomanics. The Dopomanic Managers tend to be faithful to Miserati and propagate their ideas with zeal, regardless whether those doctrines be Communism, Capitalism, Prophet driven, Monarchy, Fascism, or at other times Christianity. Christ’s message though has been corrupted by many other Miseratis of Darkness over the Millennia and is now represented by the Churches, which are not the same as Christ, being 3 tier pyramids of their own. The Managers in society maintain support programs to brainwash children. They feel it is their duty.

The Miserati have seized Seratonist Of Light countries and communities since The Start of Times through war, and have instilled their restless Agitation onto their conquered subjects. The Miserati know that agitated people expand their wealth and also their military power. This agitation is handed down subconsciously trans-generationally from subjects to their children.

It is a crime against humanity to rule Seratonaks with Dopomanic systems which do not look out for their interests. Seratonaks do not benefit from being sent to land wars abroad.

The Managed Masses at the bottom of the Power Pyramid (both the Dopomanics and Seratonaks) are encouraged to be passive recipient sheep to the Miserati of Darkness Ideals and accept their lot. They are often encouraged to behave like the ‘nice guy’ and not to rock the boat. ‘Do not challenge the shape of the pyramid’ they are told. This makes things easier for the Miserati of Darkness who wish for their power never to be challenged. The Miserati like sheep and better still lambs. Meanwhile the Managed Masses are not truly given the Bold Tools (assertiveness etc.) to escape their servitude because they were deprived these in childhood by the culture of the Dopomanic Managers loyal to the Miserati of Darkness.

NEVER dismiss the Miserati of Darkness. They are flawed geniuses who have much to offer. Learn as much as you can from them in the time available to you. Their knowledge is rich and complex.

All Dopomanics have no choice but to mainly seek wellbeing through GOALS, RELATIONSHIPS, and MEANING IN LIFE. Those who wish to follow The Light have Jesus as their Patron and Archetype. He is their best influencer (also Jordan Peterson is useful). To become Dopomanics of the Light they must avoid being corrupted by Power radiating from the Darkness, (the so called ‘Black Light’) ; they must avoid possession by Ideological Demons ; and they must not be shackled by their own Narcissistic Shadows.

For Seratonaks the best influencer is The Buddha : the only Seratonak in fact who ever managed to become a Miserati. Seratonaks must seek wellbeing through their COMMUNITY, MIND-HEALTH STUDIES (‘The Dharma’), and MEDITATION (which may not alas help all Dopomanics).

Problematically Seratonak Mindful Sages also often inadvertently support the Dopomanic Miserati of Darkness by not being in a state of forceful agitation against them. We must therefore look to the Dopomanics of The Light to change the system by becoming inspired, and rising up to become Powerful Managers. They are the Hero archetype, also known as ‘The Skywalker.’

Therefore people in Jeevism must try and find their role model – The Mindful Sage (inspired by Buddha) or The Righteous Miserati of The Light (inspired by Jesus). Are you a Seratonak or a Dopomanic? : It is not for others to say. To allow all more perspective the 2 groups must meet and discuss matters and avoid a narrow view.
Experimentation and play are important parts of self discovery. Reading of classic literature (like Shakespeare, Dostoevsky, Harry Potter etc) will be encouraged, and Psychotherapy (including CBT) will be advocated for those who need it. Antidepressants will not be discouraged. Meditative practices are also recommended – Tai Chi, Yoga, Mindfulness of Breathing etc.

The group will meet to enact Cult like behaviour (ritual, spiritual discussion, philosophy, prayer to the UNIVERSE-GOD for openness to it, psychology, play Jordon Peterson videos and celebration of art).
Art and Science will be seen as acts of worship to the UNIVERSE-GOD. The artificial nature of the religious cult will be acknowledged.

They should acknowledge that when Jeevism stops being good it should Stop for them. Jeevism is a toy to play with – a Gateway to a better life. It is a Gateway Cult

RULE 1 : All religions tend to exploit their followers financially, physically, intellectually, socially, empathically and even sexually. When JEEVISM stops being good, it should STOP for you.

Many people go to religion because on some level they wish, consciously or unconsciously, to be dominated by it : It’s TRUE! Such people, if they are reading this here, are barking up the wrong tree : they have stumbled onto the wrong website! They must engage moreover with a religion that will properly subjugate them. Do it Now!

Jeevism however LIBERATES the individual by cherishing solely Beauty, Truth, and Goodness. It has no scary cheerleaders lurking within it. There is enough fear in the real world without having to add made up trash to it !

Jeevism wishes to be popular, truly it does. To make itself popular any religion should offer some or all of the following : a charismatic leader (of course) ; certainty of heaven if you ask nicely for it ; the accessible Love of God ; forgiveness of ‘sins’ – relief from guilt ; a creation myth that explains everything ; a few good yarns ; and preferably an impending apocalypse here on earth to help the cult blossom (it focuses the mind effectively on the need for a saviour). Some also await the return of a second coming, or the golden dawn of earthly utopia.

Jeevism seeks no monopoly on these issues however, and has little to say about this fantasy wish list : some things are best left Unsaid! What it does have to share though, in spades, is HONESTY, LOGIC, and emotional TRUTH. These spring forth from the lives of KUNG-FU JESUS and his woe-busting pal The Venerated and Sacred Siddhartha Gautama : also known in ZEN as THE BUDDHA himself! 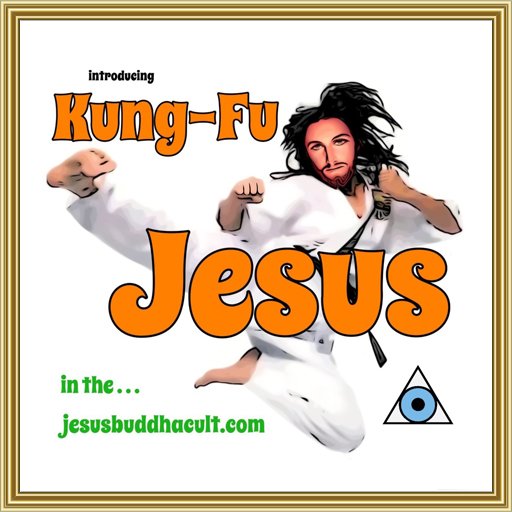